What does a Libertarian Believe

“Libertarian socialism is properly to be regarded as the inheritor of the liberal ideals of the Enlightenment.” –  Noam Chomsky

“Every man has a property in his own person. This nobody has any right to but himself. The labor of his body, and the work of his hands, we may say, are properly his. Whatsoever that he removes out of the state nature has provided, and left it in, he has mixed his labor with that is his own, and thereby makes it his property.”  – John Locke 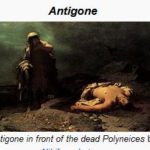 Libertarian beliefs go back to 450 BC.  It all started with Sophocles.  He wrote a play called “Antigone” in which the heroine, Antigone, buried her brother against the order of t he king.  The king had said the Polyneices fought against me and lost so let the carrion get him. She said that Zeus would not agree and Zeus’s  laws overrode the King’s laws.  Subsequently, the king locked her in a cave and killed her.  However, the play was used every year for hundreds of years to teach the concept that kings can be overruled by God. That carries on to this day. Do you recall the WWI trials of the Nazis?  It turned out that the German defendants had not broken any laws.  They just carried out orders. An American Judge on the tribunal said no, you have broken God’s law.  Since the Russian Judge did not believe in God, the ruling was changed to “Crimes against Humanity”.

This Greek play was carried over into Roman times and was taught for hundreds of years that Kings or Emperors could be overridden by God’s law.  Cicero coined the name for this concept and called it “Natural Law”.

Natural Law was used throughout the evolution of Common Law in the UK and was believed and quoted by John Locke and Thomas Jefferson.  Jefferson used it in the Declaration of Independence.  All of the founding fathers of this nation, Washington, Adams, Jefferson etc., were Libertarians.  They called themselves “Liberals” in those days but their beliefs were Libertarian.

Freedom means respecting the moral autonomy of each person. Freedom is not subject to the will of another. Each person should be free to speak, to write, to paint, to create, t o marry, to eat and to drink and to smoke, to start and run a business, to associate with others as we choose.

Libertarianism is the view that each person has the right to live his life in any way he chooses so long as he respects the equal rights of others.

America is a country founded on libertarian values and attitudes since the founders were Libertarians. Classical libertarianism’s include free speech, religious freedom, and equality before the law, private property, free markets, limited governments, and individual rights.  Americans believe in these principles far more than people in other countries simply because they were the themes of the American Revolution..

There are currently major changes going on around the world. These changes stem from two truths that people are beginning to understand.

Another truth that people are beginning to understand is that there is too much government.  The bigger the government, the bigger the failure. Today in America, there are more people working in Government than there are in private enterprise.

The purpose of a social system is to optimize the output so that all are treated fairly.

It is now becoming understood that Socialism has two major flaws and it does not work in theory or practice.  The first flaw is that there is no incentive to work hard and achieve since it gains the individual nothing.

The second flaw is that when the government and central planning does all the planning for manufacturing, they must set the prices.  The pricing mechanism of the marketplace has been removed.  No government can optimally set the price and quantities to be manufactured anywhere.  In contrast, the “invisible hand” of the market does this every day in every market. It is an organic process with billions of people and many billions of transactions.

The socialists in Germany finally recognized this and did not use the Russian communist / socialist system where the state owns the means of production.  They saw  that Russian socialism was a dismal failure.  Thus, they modified their goals. We will not control production.  We will control the profits.  We will distribute the profits from privately owned and run production facilities. They make the investments.  They manufacture.  And, we the people share the profits.  This is the modern German system.  Some of the profits will go to government – – – in the form of taxes of course.  And, the government controls the percentages.

These are the beliefs that pervade Libertarianism today.

WHAT RIGHTS DO WE HAVE

The government in our lifetimes have made such intrusive inroads into our lives that we must re-think what rights we were guaranteed under our Constitution in a free society.  Further, what right are human rights provided by God not the government. .

The Dignity of the Individual

Individuals are the basic unit of all social analysis.

The Dignity of the Individual – The dignity of the individual is a dignity that embraces or enhances social well-being. Libertarianism is good for individuals and for society.

Politicians are examples whether they like it or not.  The current politicians exemplified by Bill and Hillary Clinton and Barack Obama are collectivist and anti-individualist. You can tell by their comments.

Libertarians want to treat you as an adult, let you make your own decisions and even when they are mistakes, trusting you to find the best solutions for your own life.

We briefly reviewed the origin and philosophy of Libertarianism.  We questioned whether any Socialist system was viable.  Further, we listed the main beliefs of Libertarians.  I am currently completing a book  , “Are You Liberal, Libertarian, Conservative or Confused?  .  This is where some of the material came from.  I also provided a test for the reader to test themselves where they fall on the scale.