in Free Articles Comments Off on Trump hits Sen. Warren with ‘Pocahontas’ jab at event for Navajos 37 Views

“You were here long before any of us were here,” Trump said as he honored three Navajo code talkers from World War II. And then he added, without naming Warren: “We have a representative in Congress who they say was here a long time ago. They call her Pocahontas. But you know what, I like you.”

In fact, Trump deployed that nickname for the Massachusetts senator repeatedly during the 2016 presidential campaign and, as president, as recently as a Nov. 3 tweet. Native American leaders have called Trump’s past attacks on Warren offensive and distasteful. Some Democrats have called the nickname racist.

Trump made the comment as he stood near a portrait of President Andrew Jackson, which he hung in the Oval Office in January. Trump admires the seventh president’s populism. But Jackson also is known for signing the Indian Removal Act of 1830, in which the Cherokee Nation was removed from its lands in what is now known as the “trail of tears.”

The Navajo Nation suggested Trump’s remark Monday was an example of “cultural insensitivity” and resolved to stay out of the “ongoing feud between the senator and President Trump.”

“All tribal nations still battle insensitive references to our people. The prejudice that Native American people face is an unfortunate historical legacy,” Navajo Nation President Russell Begaye said in a statement. He added that the Navajo Nation remains honored by the White House recognition of the code talkers. 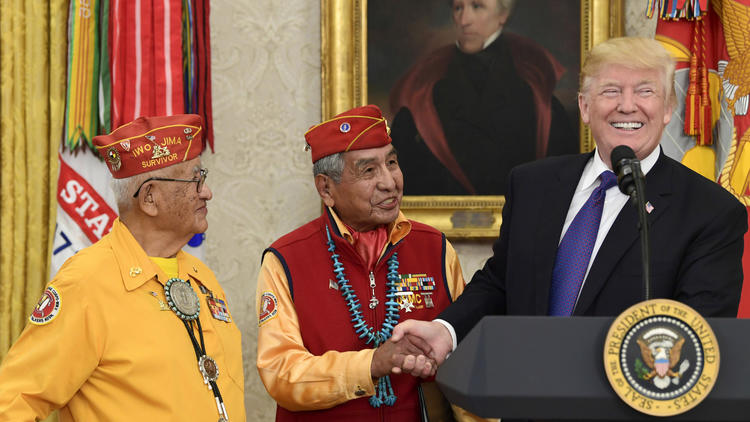 But the remark is the latest in a long list of remarks Trump has made about people from specific ethnic and racial groups. Announcing his long shot campaign for president in 2015, Trump said many Mexican immigrants are rapists. He’s sought to ban immigrants from certain Muslim majority nations. He’s come under fire for what some said was a too-slow federal response to hurricane damage in Puerto Rico. Trump also raised eyebrows for apparently having some fun in October with the name of the U.S. territory — “Puerrrto Rico,” he said — at an East Room event for Puerto Ricans.

Those in the Oval Office for Monday’s event gave no visible reaction to Trump’s “Pocahontas” comments. But Warren and other Democrats were quick to respond.

“This was supposed to be an event to honor heroes, people who put it all on the line for our country, who, because of their incredible work, saved the lives of countless Americans and our allies,” Warren said in an interview on MSNBC. “It is deeply unfortunate that the president of the United States cannot even make it through a ceremony honoring these heroes without having to throw out a racial slur.”

New Mexico Sen. Tom Udall, vice chairman of the Indian Affairs committee, added: “Donald Trump’s latest racist joke — during Native American Heritage Month no less — demeaned the contributions that the code talkers and countless other Native American patriots and citizens have made to our great country.”

The president has long feuded with Warren, an outspoken Wall Street critic who leveled blistering attacks on Trump during the campaign. Trump seized on questions about Warren’s heritage, which surfaced during her 2012 Senate race challenging incumbent Republican Sen. Scott Brown.

During that campaign, law school directories from the Association of American Law Schools from 1986 to 1995 surfaced that put Warren on the association’s list of “minority law teachers” when she was teaching at the University of Texas and the University of Pennsylvania. Warren said she listed herself with Native American heritage because she hoped to meet people with similar roots.

In a 2012 interview with The Associated Press, Warren said she and her brothers were told of the family’s heritage by their parents, the late Don and Pauline Herring.

Brown pressed Warren to release more information about how she described her heritage to potential employers. Warren said she never sought proof of ancestry because she didn’t think it was necessary.

Sanders said Monday that Warren was the offensive one when “she lied about something specifically to advance her career.”