Because power corrupts, society’s demands for moral authority and character increase as the importance of the position increases. – John Adams

Our Constitution was made only for a moral and religious people. It is wholly inadequate to the government of any other. – John Adams

A government of laws, and not of men. – John Adams

Nearly all men can stand adversity, but if you want to test a man’s character, give him power. – Abraham Lincoln

We are never defeated unless we give up on God. – Ronald Reagan

Donald Trump is a presidential candidate but is he a “good choice” in that can he do the job if he wins the election and further does he have a good chance to win the nomination.  Let us examine what it should take to do the job of president. We will also investigate whether he can be nominated and win.  I quoted above from three great presidents. They all had the character traits that make a strong president.  What are they?

I submit that all presidents should have certain common traits to become a strong and good president.  Before we get into the personality traits, let me clarify that there is a major constitutional requirement for running.  Is he a “natural born” citizen?

QUALIFICATION TO RUN:  DOES HE MEET THE CONSTITUTIONAL REQUIREMENTS

To not having the minimal requirements to run and to either lie or ignore these facts – highlights the character trait of lying.  My research shows:

Thus, two of the candidates in the race for President are not qualified to be there.  Both are of Cuban heritage and both are outstanding men.  The fact is that the constitution requires that the candidates be a “natural born” citizen which means that they are born in America and born of parents that were both native born citizens.    Neither of these men have parents that were native born Americans.

The Difference between a U.S. Citizen and a Natural Born Citizen

Lawrence Sellin, in a recent article, explains clearly the differences and provides Supreme Court rulings that back him up.[3] He feels that the political-media either is deliberately misrepresenting facts for political reasons or are simply ignorant of those facts.

There are major differences between how one becomes a citizen that is in sharp contrast to the concept of natural born citizenship. 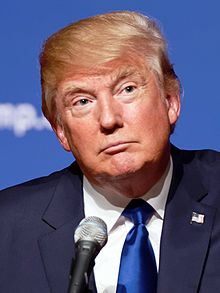 He is a native of New York City, spent two years at Fordham, and switched to Wharton undergraduate while working at his father’s real estate firm, “Elizabeth Trump and Son”.  In 1971, he was given control of the company and renamed it, “The Trump Organization”.  Since then he has built an empire that bears his name –

He ran for President in 2000, conducted an exploratory campaign, and won two reform party primaries.  His controversial statements have made him a front-runner in the polls. He tends to be truthful, politically incorrect and thus controversial.  His statements on

Those who equate “citizen” with “natural born citizen” misinterpret Constitutional law and statute law.   Statute law is that law that Congress may pass. These laws define the manner in which one becomes either a citizen – citizen by birth or a naturalized citizen. This is not the Constitutional concept of “natural born” citizenship.

Some people mistakenly cite English Common Law as the origin of the natural born citizen concept, which, the Founders rejected.   The source of “natural born” is from the codification of natural law described by Emerich de Vattel in his 1758 book The Law of Nations.

George Washington, who feared that British citizens would become a president and would undermine the nation because of his unstated but real allegiance to Great Britain, put this phrase into the Constitution. He also did not want a British leaning person commanding the military of the US.

According to Article II, Section I, Clause 5 of the U. S. Constitution, a candidate for the Presidency must be a

“Natural born citizen,” that is, a second generation American, a U.S. citizen, whose parents were also native-born U.S. citizens at the time of the candidate’s birth.

There is a difference between “citizen” and “natural born citizen” and it has been clear from the original constitution written on September 17, 1787 and its ratification on June 21, 1788.  It started with John Jay, a future Supreme Court Justice who on July 25, 1787, asked the presiding convention presiding officer, George Washington, to strengthen the requirements for the Presidency.

“Permit me to hint, whether it would be wise and seasonable to provide a strong check to the admission of Foreigners into the administration of our national Government; and to declare expressly that the Commander in Chief of the American army shall not be given to nor devolve on, any but a natural born Citizen.”

As understood by the Founders and as applied to the U.S. Constitution, the term “natural born citizen” derived its meaning less from English Common Law, than from Vattel’s The Law of Nations.  They knew from reading Vattel that a “natural born citizen” had a different standard from just “citizen” for he was a child born in the country to two citizen parents. (Vattel, Section 212 , in original French and English translation).

This definition of “natural born citizen” has been tested in Supreme Court decisions and lower court decisions ever since the Constitution was written.

In conclusion, legal precedent and interpretation leave no doubt regarding the meaning of “natural born citizen”.  For instance, let us look at some of the rulings themselves.

“The citizens are the members of the civil society; bound to this society by certain duties, and subject to its authority, they equally participate in its advantages. The natives or indigenes are those born in the country of parents who are citizens.”

“The citizens are the members of the civil society; bound to this society by certain duties, and subject to its authority, they equally participate in its advantages. The natives, or natural-born citizens, are those born in the country, of parents who are citizens.”

John Bingham, father of the 14th Amendment, which gave citizenship to American slaves after the Civil War, stated on the floor of the U.S. House of Representatives in 1862:

“All from other lands, who by the terms of [congressional] laws and a compliance with their provisions become naturalized, are adopted citizens of the United States; all other persons born within the Republic, of parents owing allegiance to no other sovereignty, are natural born citizens.”

“At common law, with the nomenclature of which the framers of the Constitution were familiar, it was never doubted that all children, born in a country of parents who were its citizens, became themselves, upon their birth, citizens also. These were natives, or natural-born citizens, as distinguished from aliens or foreigners.”

As recently as September 2008, in a Michigan Law Review article entitled “Originalism and the Natural Born Citizen Clause,” Lawrence B. Solum, then John E. Cribbet Professor of Law at the University Of Illinois College Of Law, wrote:

“What was the original public meaning of the phrase that establishes the eligibility for the office of President of the United States? There is general agreement on the core of its meaning. Anyone born on American soil whose parents are citizens of the United States is a natural born citizen.”

The presidential oath of offices requires that the presidential nominee swear to “. . . preserve, protect and defend the Constitution,” the eligibility requirements for President are unique, to ensure allegiance and prevent foreign influence at the highest levels of government.

In conclusion, it is clear that

Now let us again review the character traits that make a good president and evaluate whether Ted Cruz measures high in those traits.

Trait 1 – Does The Candidate Have A Vision For This Nation?

Trait 2 – Does The Candidate Have A Moral Compass that Can Guide Him Throughout The 4 Years Of The Presidency?

Trait 3 – Does The Candidate Have The Ability To Communicate His Vision And Moral Compass?

Trait 4 – Is The Candidate Free From Obligations To Others?

Let us examine Ted Cruz in the light of these four requirements.

TRAIT 1 – DOES THE CANDIDATE HAVE A VISION FOR THIS NATION?

Donald Trump has a clear vision for this nation.  He crystalizes it and motivates people with it

He launches from this refrain to say that

In my mind, he is correct on all of the above; I believe the American public who are honest with themselves also agree.

From his website, I find his stated positions that collectively paint a picture of his vision for this nation. It is disturbing that I find tactics rather than strategies.  His site is very similar to Sen. Rubio’s in that regard.

[3] Sellin, Lawrence, “The Difference Between a U.S. Citizen and a Natural Born Citizen”, Home : Publications, January 7, 2016.  Note: Lawrence Sellin, Ph.D. is a retired colonel with 29 years of service in the US Army Reserve and a veteran of Afghanistan and Iraq. Colonel Sellin is the author of “Restoring the Republic: Arguments for a Second American Revolution “.