in FACEBOOK, Geo Politics, Politics Comments Off on WHO’S FUNDING THE MOBS APPROACHING OUR BORDER 38 Views 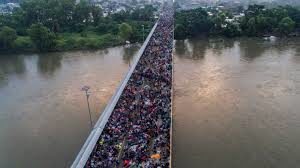 Modern education has devoted itself to the teaching of impudence, and then we complain that we can no longer control our mobs. John Ruskin

There are too many senior citizens and good residents in Chicago who are sick and tired of having to walk several blocks out of their way when they leave their homes just to avoid the gangs and drug dealers on the street corner. Rahm Emanuel

Religion is the idol of the mob; it adores everything it does not understand. Frederick the Great

I have posted on the MOBS earlier this week.  I started wondering – – – “Who’s Funding them?”   Even a very slight search comes up with George Soros “Open Society Foundation”   This is the organization that is 100% New World Oder –

Everything that is counter to our laws that maintain a sovereign nation that excludes those that do not agree with us – an American nation with fixed borders and operating as a Nation state.   I have a book on my site called “Who’s Next?” that shows that 66 bankers committed suicide with 2 years.   These were corporate officers VP and above.  16 worked for J P Morgan.   In volume II of that two volume book, I discuss the New World Oder, what it is, how it is organized and show membership.  The New World Order gang believe in the tenants of the ILLUMINATTI.    I go through them also. Among the tenants are

Basically, the NOW requires a Fascist government run by corporations such as existed in Italy and Germany in the 30a.   It also requires a Monarch / Emperor a the top.   To dictate their beliefs to society.  China has substituted the Communist Party at the top to dictate national policy.   It is the first of the NOW regional nations in fact if not in belief.   Go to my site and read all about the NWO    http://ravengeopolnews.com/    or go here  https://payhip.com/b/ocDX

News Now Reports that George Soros is behind the funding.  If so, it is consistent with his illegal funding of the immigrants into Europe.   He has consistently fought borders for any nation.

“The caravan is organized by a group called Pueblo Sin Fronteras, [b0ut the effort is supported by the coalition CARA Family Detention Pro Bono Project, which includes Catholic Legal Immigration Network (CLIN), the American Immigration Council (AIC), the Refugee and Immigration Center for Education and Legal .

At least three of the four groups are funded by George Soros’ Open Society Foundation.”[i]

Initially planned as a modest caravan of a few hundred people, it grew quickly to about 7,000 as desperation, local media coverage and a swirl of domestic and American politics combined to transform it into the largest movement of migrants north through Mexico in recent history. Even those who helped spur the mass movement never imagined it would expand so much, so fast.

Organized by a group of volunteers called Pueblos Sin Fronteras, or People Without Borders, the caravan is intended to help migrants safely reach the United States, bypassing not only authorities who would seek to deport them [in Mexico], but gangs and cartels who are known to assault vulnerable migrants …

When they get to the US, they hope American authorities will grant them asylum or, for some, be absent when they attempt to cross the border illegally. More likely is that it will set up an enormous challenge to the Trump administration’s immigration policies and its ability to deal with an organized group of migrants numbering in the hundreds.[ii]

“They hope to highlight the violence in their home nation”   is a good label for this caravan.   I have tried to find on the internet a story of who finances them – –

I cannot find a reliable source.  Rather, I find what I believe to be propaganda sources from both sides of this issue.    The allegations of George Soros funding come from Republican sources.  The best thing I saw was that the funding comes from a coalition of NGOs…These are tax free organizations that are violating their 501©3 charitable charters by breaking the laws of the US.  However, no one will ever indict them and take them to court and thereby hold them responsible.

The US Government has offered to pay Mexico for moving the migrants back to their home countries.   Mexico is currently evaluating the offer.   Most of the Mob are young men between 16 and 30.  Look at the photos yourself to prove this point.

The net of the above is that organizations are lying about the support that they are giving these illegal migrants.  This is no ethical or legal reason that they should be allowed into the US.  This has been expensive and the migrants themselves have no money to pay for the transportation cost for 7,000 people.   It appears that the political reason for the march is backed by the Democrats because it supports their “no border” desires and policies.  Further, they may believe that if they could get these 7,000 people into the US, they would get them the right to vote and they would vote Democrat.  It bothers me that every dirty trick is being used to get votes but no one in the Democratic party has the insight and vision to create a platform that people would believe in and follow. This is a MOB that has been organized by dreamers and supported by the Democrats.   Their support is “do nothing” when in fact the arrival of 7,000 people who what to come in violates all of our laws..  They do not even have the vision or desire to  change the laws if they disagree with them.  No, the democrats have become the “do nothing” party in their support for the destruction of American principles and values.

Go to my site and educate yourself on the principles that this nation is built upon.  http://ravengeopolnews.com  Look over the articles and search on topics that interest you.  I have about 200 articles on the site and write on a myriad of topics. Most are geo political articles and books.