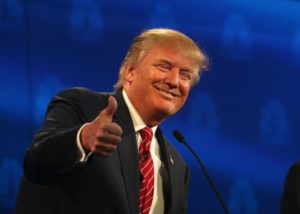 Recently, Donald Trump made a speech to the American conservative Union CPAC conference on MSNBC.    As usual, I found it quite well done.  However, the press did not get the point. A Vox statement about the speech said, “He rows of crowds, but nothing he said actually matters to reflect administration policy.”  They are right but they missed the point.  I consider Trump a magician.  He maintains the attention of the audience with his right hand while the left hand makes the changes.  Trumps Twitter tweets and public announcements are the “right-hand” diversion.  One must watch what he does in office..

In the speech Mr. Trump said: “You remember I started running and people said, quote, are you there sure he’s a conservative?” However, look at his accomplishments.

The Fed’s latest monetary policy report says, “the labor market in early 2018 is near or a little beyond full employment”.

America is witnessing a presidency of a jobs obsesssed conservative businessman.  This is what one looks like.  The progress is unmistakable and the Press and the DNC hate it – so they continue to lie.