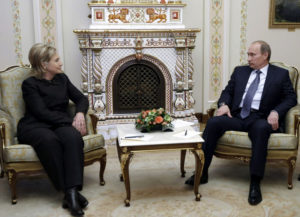 It frustrates me to see Donald Trump investigated for Russian collusion on trumped up completely false fabrications.  In fact a real Russian Scandal is how the Russians got 20% of all U.S. Uranium Mining using the Gang of Four – Comey, Rosenstein, Holder, Mueller plus Hillary and Bill Clinton.   Rosenstein appointed Mueller as Special Counsel.  Hillary benefits by keeping the limelight off of the true scandal – – – – -See my eBook,  39 Years of Clinton Scandals – 1977 – 2036,   for the full story of how Bill and Hilary moved 20% of the Uranium mining in the U.S. to Russia and received $125 million in return.  They did it with the help of the Gang of 4 and the fact that Hillary Clinton as Secretary of State had to sign off on the deal and Bill Clinton used his former office as president to get a meeting with the President of Takistan.  Obama had to be aware of all of this.   In my book, I cover dates, names of people, what happened and how the Clintons made $125 million off of their positions in the U.S. Government. It is called influence peddling and in Hillary’s case – possible treason.    The FBI has investigated this – – – even during the Obama administration  – – and has records. They just have not released them.  http://ravengeopolnews.com/ebooks/

Dick Morris does an excellent coverage of the highlights here  https://email14.godaddy.com/search.ph