ROBERT MUELLER AND HIS BRITISH DOSSIER

in FACEBOOK, Free Articles Comments Off on ROBERT MUELLER AND HIS BRITISH DOSSIER 910 Views 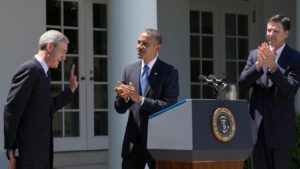 To me the Trump Dossier is a British Intelligence invention even though it was conceived of and paid for ($12.5 million) by Hillary Clinton and her controlled DNC. Below, is an analysis of what happened. I am indebted to Lyndon LaRouche and his EIR paper “Mueller’s Indictment Changes Nothing:  The Trump Witch hunt is based on British Fraud”, EIR, October 31, 2017.

The Deep State used the Dossier to get Robert Mueller appointed as special counsel to investigate Donald Trump for any connections to the Russian government in interference with the 2016 election.   This was a fraud from beginning to end.  The interference in the election was by Hillary Clinton – a consummate liar and cheat.

Robert Mueller to date has –

Mueller’s charges occurred as the House Intelligence Committee which secured the bank records of Fusion GPS, the firm which hired MI6’s Orbis Intelligence and Christopher Steele to peddle misinformation for millions of dollars on behalf of the Clinton campaign and the Democratic National Committee. The false dossier prepared by Steele, told the lie that Trump was a Manchurian candidate completely controlled by Putin as a result of sexual deviancies.  This was nonsense and called that by Trump when he first heard it from Comey.  The good news is that the FBI will turn over its Christopher Steele file this week to the House Intelligence Committee and the Senate Judiciary Committee which have been exploring the collusion of the British, the Clintons, the Obama Administration, and the FBI in attempting to first wreck Donald Trump’s political campaign and then his Presidency. In short, the deep state coup against Trump on the eve of Trump’s historic trip to China was beginning to implode  and action was needed. It came in the form of really old (10 years) news presented as new and as shocking by Robert Mueller and his media promoters.  .

The Ukraine money laundering charges against Manafort first surfaced back in July and August of 2016 and are believed to originate in opposition research conducted for Clinton’s campaign involving Ukrainian intelligence agencies and other official NATO channels. The British began pushing for Donald Trump’s head in 2015 based on his perceived desire for friendly relations with Russia. Manafort ended up on the wrong side of the 2014 British/American neo-Nazi coup against Viktor Yanukovych and has been a marked man ever since. Mueller picked up on an FBI investigation already underway against Manafort with a grand jury already hearing evidence in the Eastern District of Virginia. Since all of Manafort’s lobbying activities were conducted with Tony Podesta, brother of then Democratic Party Chairman John Podesta, Mueller has also targeted Podesta to avoid an inevitable selective prosecution motion to dismiss. Tony Podesta resigned from this lobbying firm today to fight the charges.

Mueller assigned his protégé, Andrew Weissmann, to Manafort’s case. Weissmann is known for multiple incidents of rabid prosecutorial misconduct during the Enron investigations and for using such tactics as fabricated indictments against family members to turn targets into willing prosecutorial witnesses.  The indictment reads like a press release, leading with the charge of CONSPIRACY AGAINST THE UNITED STATES when what is at issue is whether Manafort illegally avoided taxes, laundered funds by investing them, and willfully violated the registration provisions of the Foreign Agents Registration Act. Typical of the effort to pressure Manafort to lie against the President, the prosecutors sought and the magistrate agreed to $10 million in bail for Manafort and house arrest in lieu of detention, and a $5 million bail for Gates with house arrest. This is unusually punitive in a white-collar case, particularly since Manafort has known he was going to be indicted and poses no risk of flight.

The Papadopoulos charges are deep with London connections. They are based on interviews the FBI conducted with Papadopoulos in January and February of 2017; that is, before the firing of FBI Director Comey and before Robert Mueller was appointed Special Counsel.

Following his work for four years at Hudson, he moved to London to work for the British company Energy Stream for four months, followed by work from November 2015 to April of 2016 as the Director of the Centre for International Energy and Natural Resource Law and Security, a division of the London Center for International Law Practice. He served as a foreign policy advisor to Ben Carson and volunteered for Trump’s foreign policy team as an advisor in March of 2016.

According to the unsubstantiated tale told in the Papadopoulos plea agreement, at the same time as he began volunteering for Trump

The FBI files released should shed light on what really is happening.  Let’s hope that the Congressional committees are honest.