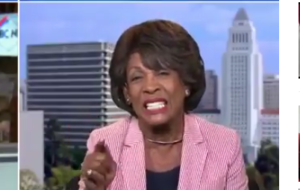 It is almost beyond belief that anyone would argue for this anti-social childish action in public.  However, for a leader in the Congress, such as Maxine Waters, this is inexcusable. She is acting like a spoiled child who did not get her way so she is violently striking out at the winner of a game of marbles.   Maxine, take your marbles and go home.   The press should not give her exposure for this type of behavior.

This woman undermines the principles of democracy.   She is the mouth of the snake of democratic progressives.   She has a big mouth with very little thought behind each statement.  She blathers lies and half truths and the press lets her get away with it.  She represents the worst in our democratic republican democracy.