The evening was heavy and could be noisy. Once, I was in an auditorium filming a speech made by Goebbels when, suddenly, it decided to emit a huge snarling sound. Goebbels froze, and hundreds of uniformed Brownshirts turned and glared at me in anger. It was not a comfortable moment. Douglas Slocomb

How fortunate for governments that the people they administer don’t think. Adolf Hitler

The great masses of the people will more easily fall victims to a big lie than to a small one. Adolf Hitler 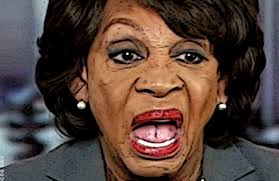 Maxine Waters’s extreme rhetoric is seeing results.  She is saying that “God” has called her to attack Trump.  This is nonsense but it is effective for ignorant, low IQ frustrated voters who wanted Hillary and lost the free election.   Commentators are catching on –

https://www.youtube.com/watch?v=S3vzuRh0P90.   They call it rhetoric.  I call it demagoguery and dangerous call to action for the low IQs like her to follow their passion rather than their reason.   The result in the streets is chaos and it is not pretty.  Maxine Waters have taken over the voice of the Democratic Party and the yipping from her is disgusting and shows her lack of quality and positive leadership.  See here for the results.

Congress should censure their colleague or kick her out of office.   Violence or harassment has gone too far.  There is no place for this in America. Her crazy rants will make America weak.

“It is extremely difficult for me to cease serving you in this role first because I count it a blessing to be serving you in any capacity, but also, because of the transformative work that is occurring,” Pruitt wrote Trump. “However, the unrelenting attacks on me personally, my family, are unprecedented and have taken a sizable toll on all of us.”

Pruitt signed his resignation letter to Trump: “Your. Faithful Friend

The Maxine Waters loudmouth screams of nonsense has distracted from the Democratic Party’s message.  No one listens to stupidity like this but other stupid ignorant people.  Unfortunately, Maxine seems to gather such cockroaches.  If she had the ability, she should try to use the English language.  Her rhetoric calls for her followers “no pigs no sleep.  If you see anyone in a restaurant, you tell them to get out they are not wanted.”

The Left no longer acknowledges that Republicans are not human.   They are using Hitler Brown Shirt tactics.  There are no differences.  Interestingly, they are calling the calm nonviolent Republicans – NAZIs.   The opposite is true.  Maxine is playing Hitler and encouraging her followers as Brownshirts to attack the political opposition.   Large segments of the population are ignoring what the Democrats are saying because of the Maxine Waters rhetoric induced violence.   The people who are claiming to be tolerant are the most intolerant in the nation.