in FACEBOOK, Free Articles Comments Off on KOEPERNICK / SAN FRANCISCO 49s and the NY TIMES 51 Views 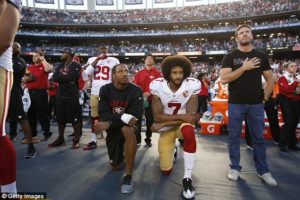 The New York Times just issued an ultimatum to all of its employees.  “There will be no taking knees if it embarrasses the New York Times.”  Donald Trump has said, “Wouldn’t you love to see one of the NFL owners, when somebody disrespects our flag, to say ‘get the son of a bench off the field right now?’”

Consider – and the NFL players that take a knee (1) Are in a uniform of the employer, (2) Are in a park paid for by the public and the employer, (3) And are being televised to international audiences by money provided by the employer.

Today’s NFL owner’s meeting will decide whether their employees will kneel or not  during the playing of the national anthem.   Everyone has a constitutional right for free speech. No one has a right to work for the New York Times nor the NFL. Thus, owners could/should say, “Stop this or leave”.

What is the difference between the New York Times and the NFL players?  The answer is money.   The NFL players are rich, millionaires, and are used to intimidating their employer.  In this instance, they have taken on the American public.  That is a major difference.  Millions of the multi-millions that watch them play a game have served in the armed forces and either have lost body parts or know friends and relatives that have been maimed or killed.  Others have lost friends and relatives.    These NFL players have enjoyed the results of freedom and gotten rich because of their fellow American’s sacrifices. They have not. Frankly, they have not earned the right to sully the memories of their fellow Americans who have.   This NFL player action is an insult to their fellow American’s service to this nation.  These NFL players have a right to protest but out of uniform, out of the limelight of their special place as celebrities – – – on their own time, in their own forum and out of uniform.  Men int the military can participate in political events but out of uniform – – – for a reason.