ITALY AND THE EU – DICTATOR SHOWS HIS FACE

in FACEBOOK, Fascist government, Geo Politics, Politics Comments Off on ITALY AND THE EU – DICTATOR SHOWS HIS FACE 38 Views

Have you noticed that if you are a dictator in a nation but you want to give the illusion that this is a democracy that you allow free elections?   I am speaking of China, Russia and Italy.    What happens if the people vote and approve something that you do not want?  You – CHANGE THE RULES!

In Italy, the people voted for and got two leaders from outside parties and put in place a new Prime Minister – – – – Conte.  The bankers in Brussels and Germany were afraid since the parties that elected him  – – – The League and the Five Star Movement both had planks that said – – – – leave the European Union and deport the immigrants.    Go back to Italy as a nation.   This is the progressive movement that hit UK with BREXIT and the US with Trump.  People are fed up with our politicians on both sides of the Atlantic.They are not stupid and they recognize that the politicians are only interested in feathering their own nests.     The people want to be heard. 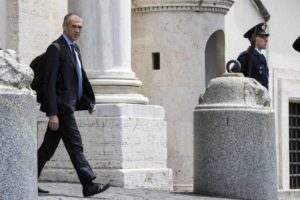 It appears as if the citizens of Italy were heard but the dictator bankers of Brussels and Germany did not like what they said.   The result is that the politicians in power changed the rules on a free election.  President Sergio Mattarella listened to his backers who supply money for his election and keep him in power.   He changed the rules.

What are the dictators afraid of?   The answer is losing power. They see the populist election in Italy as a way for themselves to have the European Union disband and the Euro to disappear. Both parties that have coalesced what Italy back as a sovereign nation.  Accordingly, Conte may lead them that way.    Why take the risk?    Ignore the people vote and put a man in power who will take orders like Mattarella.   How to do this is simple.  Our man Mattarella as president can ignore the election and put his (our) man in the PM position.   They have chosen  International Monetary Fund (IMF) (banker’s  man) Carlo Cottarelli to form a government.   Why?  He is a big backer of the Euro.   It would make the bankers safe. The money would keep flowing to the politicians.

Carlo Cottarella is the opposite of the man Conte chose to be economist minister, Paola Sovona, an 81 year old Eurosceptic The bankers fear the Mr. Savona is planning to exit the Eurozone which would put an end to their power game of dictating to the Italian people.

There is only one object to the game that politicians play – stay in power by keeping the money flowing from their backers.   They must listen to and follow the direction of their money backers – – – or else they lose the election and are out of power.