INVESTMENT CONSIDERATIONS IN OUR CURRENT MOUNTAIN OF DEBT

America have seen this much debt since the end of World War II over 72 years ago.  Today America’s debt to debt to GDP ratio is about 105%.    Economists believe that those debts of 60% are maintainable. This means that you can carry that much debt still grow the GDP at 2 to 4% per year.   Recent economic studies by Reinhart and Rogoff suggest that any debt over 90% of GDP will lead to very slow GDP growth.  This is in contradiction to the Keynesian belief that consumers are not buying that the government must step in and spend.  Every dollar the government spends is added to national debt.   Reinhart and Rogoff believe that the government must stop this spending frenzy.  If they do not, then the national GDP will not grow fast enough to support the interest on the debt. 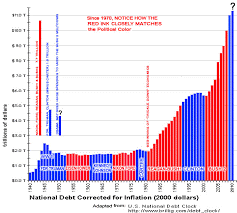 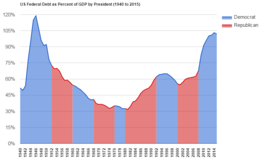 Where it leads – Bang or Whimper

If the US continues to add to their debt above the 105% level where they currently are, then the economy at some point in the future will stop.   In either will crash with a bang and everything will come apart, including the financial markets, or it will do as the Japanese economy has done over the last 20 years – die with a whimper.  The whimper is epitomized as the structural winds of growth.  There will be none.   Above 90% debt to GDP ratio, one can expect median growth rates will fall by 1% and the average growth rate will also fall.  Over 90% debt to GDP ratio will make debt as the dominant factor in a nation’s growth.

In September 2011, the Bank of international set settlements (BIS) agreed with Reinhart and Rogoff. In their paper, they agreed with the 90% threshold and even suggested that it is really 85%.    However, not all economists agree.  The Keynesian followers believe that the government can spend as much money as they want, and the Federal Reserve can add to the balance sheet is much as they want, and that this action should lead to economic in the form of the GDP rising.   What should note here that the question is not whether the GDP will rise, but by how much?   After 90%, the growth rate will drop.   One has to spend a lot more to get a little bit more in growth.   History has shown this to be true.   The Keynesian projected 4% growth in the first quarter by increasing the debt, but the actual results for less than 2%.

The current national debt is $21.2 trillion.   However, the US has an astounding 37 trillion of unfunded pension liabilities coming due over the next few decades. If these debts were added to the current bonded debt, then the debt to GDP ratio would be over 1000%, not the hundred and 20% recorded at the end of the second world war will.   This is reality and not propaganda.   Our government lives by propaganda and uses it adroitly because this is what keeps the current political set in office and in power.

Modern monetary theory, MMT, proposes to be a new 21st-century approach to the problems of government finance and economic growth.   MMT has been around for about 20 years, but under a different name – Chartalism. The concept is simple in theory.  It begins with the proposition that the government has a monopoly on money and weapons.

The monopoly on money is based on the fact of the central bank. They can print money and make it the only form of legal tender. The government then exploits the monopoly through the tax system by demanding that the government-approved money be handed over payment of taxes and they have guns to back this up.

It is interesting to note that chartalists do not support the second amended and want guns removed from society.  Further, they oppose crypto currencies because they become a threat to the government’s monopoly of fiat paper. An interesting fact is that between 2008 and 2014, the Fed printed $3.5 trillion of new money to deal of the global financial crisis.  The Fed’s balance sheet balloon from $800 billion to over $4.3 trillion a day trip fed is trying to sell that accumulated debt to the public and reduce its balance sheet debt.

MMT advocates claim that citizen perceptions do not matter because they will have to accept dollars to pay taxes and that politicians will not rein in the Fed because the politicians are the ones who voted for the deficits and support the spending in the first place    . You will be hearing a lot more about MMT in the months had because it has some superficial appeal and seems to offer a painless way out of slow growth, high debt scenario currently happening in the economy.   You will not hear the MMT advocates talk about super debt, leading to hyperinflation and increased state power. Rather, the MMT supporters will talk about the wonderful benefits government can provide if the Fed simply monetizes the debt.

How to Prepare Yourself

In a world where our politicians will do or say anything to maintain themselves in power, you cannot rely on the government to protect yourself in either hyperinflation or deflation.

Jim Ricard has a solution that is simple, but I very much like[i].   Because of the barbell portfolio, this debt will lead to either a crash with hyperinflation attached or a Japanese-style drop for 20 years with deflation.  Thus, one needs to protect oneself for both inflation and deflation.   On the inflation side one should consider buying gold, silver, land and other hard assets.   The deflation protection should consider 10-year treasury notes, utility stocks and technology companies that continually reduce costs.

The Treasury bond I shares TIPS bond ETF (NYSE: TIP) is an index of inflation protected US treasury bonds which have no default risk. These types of bonds are known as “tips”, rise in value if inflation occurs in fall in value deflation occurs.  Accordingly, it makes a good investment because it has belt in a barbell portfolio.

An interesting observation about TIPS is that they are like a lower volatility index proxy for gold. There is a tight correlation between tips and gold when gold moves sharply in a certain direction so does the tip ETF.  We expect gold to perform well over the near future, as well as over the long-term so TIPS should deliver good returns one should consider holding tips as well as gold because it does not fall, as much is gold in a bear market but will rise in a gold bull market.  One should expect in the years ahead TIPS should deliver returns of between 5 to 15% per year without much risk.