Hart Data Base Of For Us Citizens And Foreign Travelers To U.S

in Geo Politics, Politics Comments Off on Hart Data Base Of For Us Citizens And Foreign Travelers To U.S 33 Views

United States Department of Homeland Security (DHS) is a cabinet department of the United States federal government. Its responsibilities include public security, and are roughly comparable to the interior or home ministries and of other countries.    Stated mission involves antiterrorism, border security, immigration and customs, cyber security, and disaster prevention and management.   It was created in response to the September 11 attacks as the youngest US cabinet department.

With that number of people, it is not surprising that they come up with programs that were not authorized by the Congress nor monitored by the Congress.   They must have something to do.   With little or no constraints, if it sounds goods, they do it.  Relatively recently, they have focused on creating a national database for all citizens and all travelers into the county.  Included in this database are –

During the Obama administration, they had major retention problems with personnel.  In addition, they had 6 commissioners with 4 being not confirmed by the Senate.  They also run and staff the Transportation Security Administration (TSA) at airports.

The US Department of Homeland Security is building what will purportedly come to be the largest database base of biometric and biographic data on citizens and foreigners in the United States. Hart stands for Homeland advanced recognition technology database and will include multiple forms of biometric data – face recognition, DNA, data from questionable resources, and personal data on innocent people.   It will be shared with federal agencies outside of DHS as well as state and local law enforcement and foreign governments. Yet, we still know very little about it.

Data from face recognition makes it possible to identify and track people in real time, including at lawful political protests and other gatherings. Other data about people’s relationship patterns allow the database to identify political affiliations, religious activities,  and friendly relationships. These data points are quite often colored by conjecture and bias   . Why should the government do this?    The First Amendment protects our rights to speak, assemble and associate freely.   This database in the hands of police will remove that right.

Today the government has ignored complaints and concerns related to the First Amendment.  They are continuing to build this monster.  The government says it is ncreasing the security of American citizens and is thereby promoting it.

This aggressive plan shows it being completed by 2021 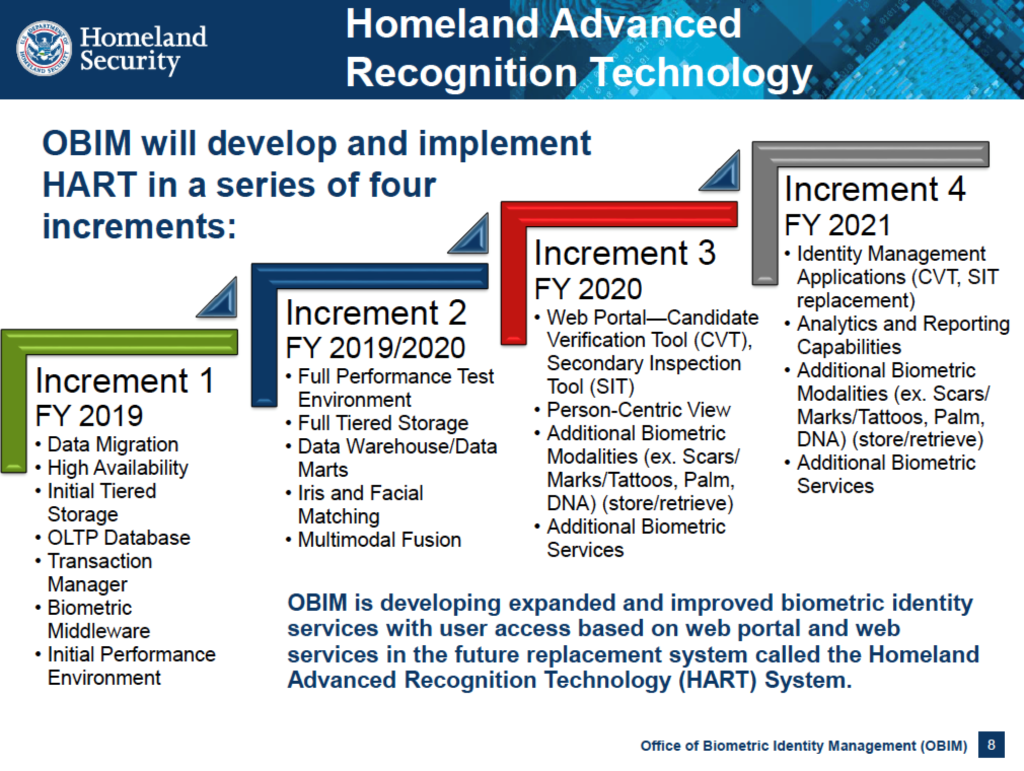 All countries are going to these systems.  I have been in IT for 50 years and I concluded a long time ago that if it technically could be done, then the government would do it.  This is how vendors make their money off government.  They seldom if ever question whether “It should be done”.   This is in direct violation of our First Amendment rights but no one in Congressional leadership is blowing the whistle.

I see systems like this growing all over the earth.  In the UK, the number of video cameras in London means that there is no privacy.  With this software and the existing cameras, an individual can be tracked all over the city.  With the ability to focus on faces in a crowd, then people and groups can be tracked anywhere in the city or country.   This means that “Big Brother exists” and he is beginning to systematize controlling citizens wherever they are.   China is now implementing a system the ranks people as to whether they are good citizens depending on what they do, where they go and who they associate with.  They enforce their view of what a good citizen should be by denial of services – you will not get the good job, you will not be able to get the loan to buy the apartment, etc. In a totalitarian society such as Chine, one should expect that attitude.  The Communist political leaders at the top must monitor and control the citizens or they will be thrown out of power.  In the U.S., we are supposed to have a representative government protected by Patrick Henry’s Bill of Rights.  Little known is the fact that he forced them into the Constitution over Madison’s and John Adams’ objections.  He did not trust any government from exceeding its power and imposing their will on the people.  Madison and Adams thought that the Constitution itself was strong enough.

Pass this on to your Congressman if you like. This is something that they should be made aware and to get involved with.