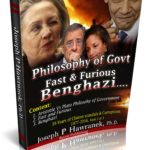 This book has three sections. First, I discuss the Philosophy of Law of Plato and Aristotle. This is directly relevant to the Obama administration. Then I discuss gun running in Fast and Furious. Finally, I discuss gun running in Benghazi.  They are directly related to our philosophy of government.
My research found that the Obama administration is ignoring the Constitution and switching the philosophy of government from what our founders set in place in the Declaration of Independence and the Constitution. This is the underlying causal problem in both Fast and Furious and Benghazi. The Obama administration is acting like an emperor and in that position he feels that he does not have to respond to laws or the people – just “do as I say because I can override the law”. This is the philosophy of Plato expressed clearly in his book, The Republic.

In strong contrast, the founders followed the philosophy of government of Aristotle, which ascribes to managing a nation under one set of laws that the emperor as well as the people must live under. Obama has switched that philosophy to Plato who held that a King / Emperor could override the laws of the people. Thus, what the King wanted became the law. This is a major switch in government philosophy for this nation. This is so important and fundamental that the book examines this concept from its source to its current polar switch.

Obama now acts as the Emperor / King that operates under the philosophy of Plato and that allows him to ignore the Constitution and do whatever he desires. If he were obeying the Constitution and the Law, why isn’t he being held liable for violating these laws?  Why did he support Eric Holder in directly ignoring the Congress?

It is now apparent that the State Department (Hillary Clinton) and the CIA (Leon Panetta) in Benghazi and the State Department (Hillary Clinton) and the Justice Department (Eric Holder) in Mexico conducted gunrunning operations. In both instances, guns were intended to be delivered to “declared enemies of America”. Because of these actions, in both instances, many people were killed among which were several Americans. Further, it appears as if the guns supplied by our government killed thousands of foreign people in Mexico, Libya, Afghanistan and Syria. Further, the guns supplied in Libya are now known to have been used to shoot down 40 American helicopters in Afghanistan. Unfortunately, most of the actual deaths are not fully documented anywhere. These gun transfers were in open violation of our existing law and in fact helped our enemies because they were being transferred to known enemies of America. They clearly violated the Constitution, which states in Article III, Section 3:
“Treason against the United States, shall consist in levying War against them, or in adhering to their Enemies, giving them Aid and Comfort.”

These words raise the question that if the government under orders, from the Executive, “aids” the nation’s enemies which are the drug cartels in Mexico (re: War on Drugs) or supplies arms to Al Qaeda (re: enemies we are fighting in the Mid-East because of 911), should be questioned as potential “Acts of Treason” per the Constitution. If so, then the motivation for “cover up” becomes vividly clear. On the other hand, the legal issue may be “smoky” since President Obama formally issued an order to aid the Libyan but not the Syrian rebels, some of whom were Al Qaeda (in Libya) and ISIS (in Syria). By definition, supplying arms to our stated enemies, the Al Qaeda, was a treasonous act per the Constitution. This executive order action provides arms to our enemies.

These issues are explored in the book. Further, the details of what happened are delimited. They include –

Fast and Furious
· A Department of Justice operation enabled guns being bought in the U.S. and shipped to Mexico with intent to go to Drug Cartel gangs.
·  These guns were used by the cartels to kill border patrol agents, kill many Mexican citizens and kill opposing cartel enemies. We have the serial numbers because they were returned by Mexico.
· Mexico was not informed of this operation but they supplied the serial numbers of guns found at crime scenes that identified them as Justice Department supplied weapons.
· Eric Holder and Hillary Clinton covered up by denial, refusal to supply evidence and moving people in Department of Justice and State to other positions so that they cannot be interrogated.
· Eric Holder was held “In Contempt of Congress” for lying to Congress and refusing to supply evidence, which were records of this operation that he ran from the Justice Department.
Part 3 – Benghazi
· A Department of State (Hillary Clinton) and CIA (Leon Panetta) covert operation in Benghazi was set up with the ambassador being a CIA asset specifically put in place to

The men killed at Benghazi were there on a covert mission. When it became apparent that the attack was a planned Al Qaeda terrorist military attack, the State Department refused to rescue the Americans who put their lives on the line for what they thought was a valid mission. That support would expose the covert mission and the politicians that created the operation – Obama, Clinton and Panetta.

This book covers 1.  How Hillary’s Decisions Created ISIS.  2. Why Hillary, Panetta and Obama should be held accountable for the possible treasonous act of supplying guns to our enemies.  3. How the cover-ups of Hillary backfired and 4. Show how cover-ups in our government have now become a way of protecting the politicians from their at times silly and stupid decisions.

“What difference does it make?”

The difference is whether this nation lives under a nation of laws or a nation of tyranny run from the White House. Read the book for all the details and then draw your own conclusions.  All details are provided for you to make a decision.