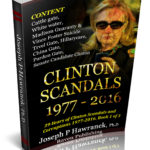 The author broke the 39-year time-period of scandals into two parts. In Period one, we have Clinton as Attorney General of Arkansas, Governor of Arkansas and moving on to the Presidency of the United States. Hillary and Bill consistently and constantly seem to be creating situations that end up as scandals from the time of Bill being Attorney General.

One can dismiss Cattle Gate as nothing of substance. However, Whitewater and Madison Guarantee and Savings involved federal guarantees of loans, which required millions of dollars of taxpayer money being used to bail out these fraudulent loans. Everyone involved went to jail except Hillary and Bill Clinton. Yet, they were principals in the fraud but not indicted. The critical element of proof against Hillary was her legal billing records from the Rose Law firm to the McDougals at Madison Guaranty. The records disappeared after Vince Foster’s death.  Read and find out how evidence disappeared and McDougal died in prison resulting in Hillary getting off indictments.

The scandals followed them to the White House and 5 investigatory committees were working full time to figure out what happened. Travel Gate had caused at least 3 of those investigations.   Vince Foster, on orders from Hillary, fired all the government travel gate employees.

Vince Foster, a law partner of Hillary Clinton, came to the White House as a public employee but acted as a full time defense attorney for the Clintons. This was illegal and noted as such by the investigators of the Foster death. In the Foster Suicide, we concluded that he was probably murdered by a small (probably.22) caliber to the neck not a .38 caliber to the mouth as per the FBI official report. The civilian whose name is disclosed in this book that found the body has filed a civil case against the FBI stating that the FBI substantially changed his testimony as to what was found at the scene. This was part of the cover-up. The other part was that Vince Foster had possession of all of the Billing records of Hillary Clinton associated with the Rose Law Firm and Madison Guarantee that had been subpoenaed by the investigative committees. These records would have shown how she advised the McDougals in this fraudulent scheme. It appears that the billing records were removed from his office during the two days immediately following the Foster body discovery.

During these two days, the White House, on Hillary’s orders, refused to allow the Park Service to enter his office. Many others were allowed – including her private attorney. Please understand in a suicide or homicide that his office is officially a crime scene until the cause of death is determined.   The billing records turned up 22 months later in the private quarters of the Clintons at the White House. Hillary denied knowledge of how they got there. On the other hand, White House Secret Service records show that the Secret Service reported that they saw an armful of records being removed from that office by Hillary’s private secretary.

China Gate appears to be a clear case of Chinese espionage. The Chinese government sought to affect policies in the United States government. One agent, John Huang, during the Clinton administration, held a high level Department of Commerce position because Bill Clinton appointed him to that position.  This post enabled him to view top-secret information. According to the FBI, he visited the Chinese Embassy frequently. The motivation appears to be money for the Clinton reelection campaign and the Democratic National Committee. The FBI pointed this out and some money was returned - but not all of it was. All of the Chinese infiltrators eventually went back to China with no punishment. It was a long list including “Charlie” Trie, John Chung, John Huang, Maria Hsie, and James T. Riady. They all had initially made contact and met Bill Clinton in his Arkansas days.

The Health Security Act of 1993 has been dubbed Hillary Care. It looked like our current Obamacare.  It was a catastrophe from the beginning to the end. The special task force run by Hillary Clinton was run in secrecy. The final report was so offensive to the American people, the Congress and the industry that it was promptly turned down. The result was that her task force cost $32 million. Hillary was personally fined $450,000 for lying to the investigatory committees. The taxpayers paid $750,000 legal fees to protect her. Finally, in the next election, both the House and the Senate went Republican.

Pardon Gate appears to be blatant bribery. If you want to get a pardon, pay Hillary’s brother, contribute into the collective Clinton reelection campaign, put some money into the Clinton library, or put some money into Hillary and Bill’s Charitable Foundation. They were flexible. The people that were set free were breathtaking. They were murderers, terrorists, drug merchants and international thieves – none of the ones in jail had a sentence less than 35 years. It was like releasing multiple Barabbas’s into society. Jimmy Carter called it “shameless”. A special counsel was called to investigate and he gave them a pass with “no laws were broken”. His name was James Comey and he is the current FBI director who gave Hillary another “get out of jail free” card on her server.

When running for the Senate, Senator Hillary Clinton was investigated for Senate Election Financing. She again appears to be guilty, paid some fines and was not indicted.

The four big scandals during Hillary’s Secretary of State Tenure were covering up gunrunning in her Fast and Furious (Book 2) and Benghazi (Book 2); and possibly covering up treason with her Server (Book 3) and the Clinton Fund (Book 3).

The recent Dick Morris best seller, Armageddon, mentions several of these scandals but not all and provides few details. If you want to know what really happened, how it happened and how much it cost the taxpayer read this book and be surprised at the audacity, carelessness, corruption, lack of concern for the law and “power at any cost” attitude that pervades the Clinton’s actions while in office.