THE ATTACK ON KIRKUK MATTERS

in FACEBOOK, Free Articles, Geo Politics Comments Off on THE ATTACK ON KIRKUK MATTERS 36 Views 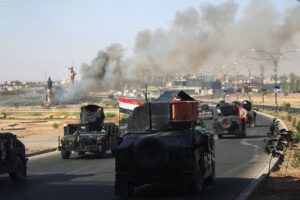 Smoke billows as Iraqi forces advance towards the centre of Kirkuk during an operation against Kurdish fighters on October 16, 2017.
Iraqi forces seized the Kirkuk governor’s office, key military sites and an oil field as they swept across the disputed province following soaring tensions over an independence referendum. / AFP PHOTO / AHMAD AL-RUBAYE (Photo credit should read AHMAD AL-RUBAYE/AFP/Getty Images)

Iraq just attacked and retook Kirkuk from its ally, the Kurds.  What is going on?  Here it is –

Possibly, Tillerson / Trump are wise to stay away at this point.  However, it will not go away.  Kurds want their own nation and have earned it with blood fighting ISIS.