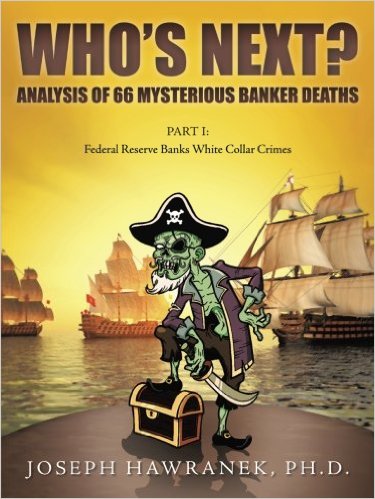 This is a two-part book about the Federal Reserve and its relationship to LIBOR, FOREX, and gold price manipulation as well as doing two things.  It lists and puts on a timeline 66 mysterious deaths that for the most part were labeled suicides by the newspapers but do not appear to be suicides.  In Book 1, the 66 mysterious deaths are listed and analyzed as to who, age, date, surrounding circumstances and in which bank and position they held. No one on the list is less than a vice president or equivalent.  These deaths were correlated with the six international investigatory commissions from four nations that were ongoing during this period to determine how, and how much price fixing was done on LIBOR, FOREX and gold. At the time that this book was sent off to the publisher, the deaths were occurring at a two per month rate.  Consequently, the author believes, that if he continued, the list would have grown 100.  When Eric Holder fined the banks $20 billion in June/July 2016 for LIBOR and FOREX price manipulation, the deaths suddenly stopped.  During this time, both Jamie Diamond (JPM)  and Lord Blankfein (G Sachs) received salaries and bonuses over $50 million each.  The author describes what needs to be done to truly stop this white-collar crime.  A fine will not do it.

In Part II, the focus is on calculating the amount of theft that occurred – sector by sector.